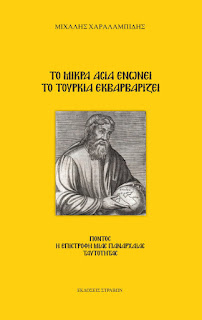 The metastases of the Turkish cancer from Paris (2013), Kobani, Sorouts, Cizre, its periphery, appeared on the most aggressive form of it in the center, in Ankara. Near the mausoleum of the founder of an ideology of death, Kemal.
The murderous bombs of the genocidal caste posed now in the International agenda the Turkish problem, the Turkish pathology, the chronic Turkish disease.
The geopolitical immorality of the States, big or medium, cannot stand any more. It lasted for too long.
Its non-resolution causes even into the new century constant disintegration of historical press in the region. Nowhere on the planet do we face such a periodic recycling of genocidal brutality.
The pictures of Ankara brink back in our memory similar images by genocidal acts victimizing indigenous Greek populations.
Decades now I have been arguing that Greece should emerge as a moral power in the region.
She did not do it.
She is obliged to do it today.
The Greek Government does not need to recourse for bilateral meetings and easy, unethical handshakes which legitimize the killers who are seeking for them especially after their criminal action and in particular from the Greeks.
History, Rights, Politics delegate our country with great responsibilities, tasks and roles.


The Greek Parliament, all of its sides, must honor the dead, the new victims of the Turkish machine of death who are once again young people. This time it is not the children of the Greeks, the Armenians, the Assyrians. It is the children of the Kurdish people. The Karduchians of Xenophon, I said to the UN in Geneva in 1986 and the felonious mechanism of the station targeted my life.
This act will symbolize the end of tolerance to the Turkish genocidal caste by the European and International community.
International policy is now facing a moral, historic landmark. The slaughter of the children at the Ankara station. The passage from its immorality before the station crime, to its the morality, humanization after that. This is our posture, our message.
Our civilization.
Our Hellenic way.