ARGONAUTS FOR THE LIBERATION OF PROMETHEUS - ÖCALAN

ARGONAUTS FOR THE LIBERATION
OF PROMETHEUS - ÖCALAN 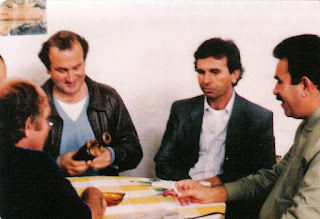 In Kalolymnos, this is the Greek name of Imrali, it is not only the legal representative of an indigenous historic people that is prisoned for twelve years, Abdullah Öcalan. It is Democracy and Human Dignity that are imprisoned as well. Just as Nelson Mandela was imprisoned on Robben Island of Racist South Africa.

It was Öcalan and the Kurdish movement that fueled the procedures of democratization and humanization in Asia Minor.

The response to this request was a new genocide, that of the Kurds.

For this new crime the Turkish military and political leaderships are guilty and must be indicted to the International Criminal Court of Hague. Years ago the then President of the Court Carla del Ponte said that it was their turn. This was later suppressed for interest related reasons. We had the classic policy of preservation and tolerance of the Turkish slaughterhouse, of which the first moral and political prosecutor was Rosa Luxemburg.

In Greece the name Kurds, Kurdia and Öcalan is forbidden after the crime in 1999. The Kurdish fighters are now facing many obstacles and humiliations by the pervert cooperation between Ankara and Athens (non-Athens so as not to offend the name of Athens).

There is an internationally growing campaign of solidarity for the liberation of Abdullah Öcalan. Protagonists of this are Noam Chomsky and the South African Bishop Desmond Tutu. The best of modern Humanism and Internationalism. During the '80s and early '90s, we were only four or five people in Europe. Now we are many.

There are two symbolic dates. One is August 9th, Day of Indigenous Peoples Worldwide. The Kurds are indigenous. The Turks are not. I write in my last book about it [1]. The other is August 15. It is the day of August 1984 during which a few young people attacked the Turkish SS, instigating a movement that changes the Political, Economic Geography and Institutional Architecture of Asia Minor.

Either on the 9th of August or the 15th of August, we can all people who consider the prison of Imrali an Ecumenical shame, to besiege with sailboats this island in the center of Marmara, which was transformed into a death place. The history of our region is rich in symbols which constitute symbolisms for the whole world. The campaign can be called «Argonauts for the Liberation of Prometheus Desmotes (Prometheus Bound)».

In the Marmara Sea shall meet sailboats coming from the Euxeinos Pontos (Black Sea), Bulgaria - Russia - Ukraine through the Bosporus and those that will come from the Aegean through the Hellespont. There can participate also Kurds, Arabs, Lazes, Pontians, Turks from Constantinople.
But I think that these times are not only mature enough, but also actual and necessary the solidarity to initiatives of this type from representatives of all churches and religions that are based in Constantinople. Orthodox - Catholic - Jews - Sunni - Shia - Alevi. It is a period very critical and demanding for the Turkish Islam so that it not only gets rid of the guilt and crimes of the past but also to stop repeating them while manipulated politically.

This is a setting of peaceful coexistence and mutual respect between people regardless of religion and nationality.

In Kalolymnos, Imrali are deemed in practice these values.
With the Öcalan Bound in Imrali there can be no solution to the chronic Turkish pathology, the Turkish problem.

Unfortunately there is no Hellenic Institutional leadership group to make this clear in Brussels and all over the Ecumene. But it is hopeful, pleasant so as to get out of the contaminated cloud of hypocrisy, of lies, of tolerance, the fact that young directors are keen on raising the Prometheus Desmotes of Aeschylus adapted to Öcalan Desmotes.

It's time for the return of theater in Asia Minor. In its destroyed, empty and buried in the land theaters.

[2] The text was distributed during the press conference of Abdullah Öcalan’s lawyers held in Athens, on 4th of November 2015, in the hall of the Athens’ Bar Association. The interview was attended by the HDP MP, Dilek Öcalan, niece of the leader of the Kurdish people.