Elections is one thing, Genocidal War is another


MICHALIS CHARALAMBIDIS
(For the Ankara elections)

Elections is one thing, Genocidal War is another 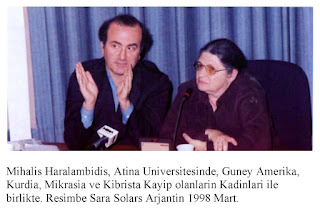 This is not a democratic election of representatives through universal suffrage. This is a polemical enforcement of a prefabricated exopolitically artificial totalitarian majority in a supposedly parliament, via exclusion and extermination of the other, of the other people. Of the Kurdish this time.

It is not only assassination of politics, it is war, genocidal war by armed, fascist mechanisms of the racist totalitarian state.

Its victims are both political dialectic and Democracy. But above all human life, human dignity, the children, the swallows of Suruç, of the Ankara station, the desecrated Kurdish women with the pure and free faces. Victims are the swallows of the New Spring of Asia Minor's Peoples.

The Islamic-military racist caste of Ankara and Istanbul is not running elections, it is making war, it thirsts for genocidal wars. It transmutes the elections to genocidal war.

This barbarity wants to invade in Europe so as to barbarize it.

«Just for a bunch of euros».

Greeks, Armenians, Assyrians have suffered and watched this horror-movie a century ago. The Kurds watched it in 1925 and 1938. They are watching, suffering it once again.

It is really unfortunate that the big Kurdish director Yılmaz Güney is not alive, he could direct a movie of complaint and ridicule of this ongoing barbarity and continuous forlorn hypocrisy. But as I said and I wrote three decades ago «in the New Eastern Question the Verdict will come from the People».